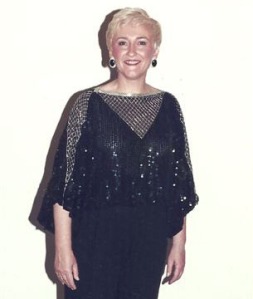 Liz Clark: Well hello, Mrs. Fletcher! We have been working together on theatre projects since before the VOS was founded. You have such a wealth of experience and so many great theatre stories – wanna talk?

LC: So you’ve taken a six year break from work as an actress with the VOS to take on projects for the organization as artistic director and producer and props mistress. How does it feel to be back singing and dancing again?

FF: It’s great, I’m enjoying being a cast member again. Getting back to my roots in theatre having the opportunity to step in front of an audience again.

LC: What is the most exciting thing for you as a performer – why do you do it because it’s a lot of work and rehearsal time before the Opening Night pay off?

FF: I enjoy the whole process; rehearsals, developing a character, learning the music and lines, working with the other cast members; the on-stage rehearsals leading up to Dress Rehearsal when we work through the show night after night honing the performance until it is just right; the excitement back stage waiting to hear “places”; that special feeling on Opening Night when you step out into the light and “strut your stuff”, feeling the response from the audience and hearing the applause, it’s all magic. 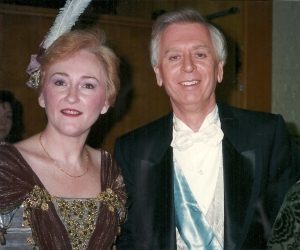 LC: Executive producer Joel Varty wants to know about your accent……where were you born and raised?

FF: I was born in Glasgow Scotland, just as the noon whistle blew at Beardsmore’s Forge in Parkhead, of a Scotish father and an English mother. We moved down to England when I was 2 1/2 to Blackpool where my mother’s parents ran a boarding house (English for a small family run hotel).

Blackpool is a seaside resort town in Lancashire, on the West coast North of Liverpool. In the 50’s and 60’s it was still a very popular destination for summer vacations. Not so much these days as the Brits have started to travel abroad much more. Blackpool had a thriving theatre comunity with many famous performers appearing at the various theatres in the summer season. During my high school years I worked for 2 summers at Blackpool Tower, a tourist complex incorporating a circus, menagerie, aquarium, ballroom, bars and amusement arcades.

We emigrated to Canada in 1966 and lived in Toronto until I married in 1969 and moved to Cobourg where I worked at the Royal Bank until children took over the leading role in my life.

LC: You’ve been cast in some pretty spectacular roles from Marion the librarian to Gweneviere to Rose Ouimet in Les Belles Soeurs and the Stepmother in Sondheim’s Into the Woods. Any favourite moments?

FF: They are right when they say you never forget your first…. I do have many wonderful memories of my first role in Cobourg as Marion Parue in Music Man with Blair McFadden back in 1983. That was so exciting, I couldn’t believe that it was all over when we had completed our final performance. I’ve been hooked ever since. Camelot is one of my favourite shows and playing Gueneviere was spectacular. The range of emotions required to play that role was a wonderful challenge.  Working with so many amazing people over the past 20 plus years has brought so much depth and joy to my life, I wouldn’t change a moment.

LC: We’ve built sets together in buildings without heat in the winter so when we laughed we could see our breath, we’ve put costumes together on Saturday mornings using sewing machines older than God and material almost that old, we’ve hand glittered hundreds of posters and sat up all night working on press releases and marketing ideas to set in motion the next day. We’ve moved into the hall in April during snow storms, built parade floats out of toilet paper tubes and Christmas string lights, spent hundreds of hours on bookwork and the planning of seasons. Together we’ve been through divorces and weddings, kids leaving for university, work stresses and the birth of my kid and always there was always theatre in there too. How does it fuel you?

FF: I love to sing. I love to perform. I enjoy the opportunity to enable others to have the same amazing experience as I do, so I enjoy directing and producing as well as all the other jobs I have tackled over the years. We have done some extreme things over the years to get a show on the stage from taking out loans to fund shows in the early days to putting in all the hours there are to get something done by deadline. Covered in paint, exhausted, frozen, wearing whatever costumes we could create from bits and pieces. Together we’ve done it all – and more. Then we have dragged everyone else along behind us at times to get the job done. The VOS at times was my family. Once the kids had grown up and I was on my own Liz Clark and the VOS was my family. I met Alan through the VOS, we became friends, we worked together on the VOS board, eventually we fell in love and we even got engaged on the stage at Victoria Hall. One of the things that Alan and I love about being involved in the VOS is that it is a group that we can both be involved with, offer our various talents and both enjoy the satisfaction of working together for a common goal.

LC: What’s the most fun – what part of a production truly brings you joy as an actor/singer.

FF: The people, working with all the talented people over the years, seeing some youngsters grow up in the VOS family becoming wonderfully accomplished young adults. Walking into the hall after move in when the set guys have done their magic and we see the set for the first time. The excitement starts to build right there. Getting it right! The feeling when it all comes together and “YES” we have a show.

LC:I loved watching you and your dad work on shows together. You had such a sweet and loving relationship. What’s your favourite theatre memory that involves your dad?

FF: That’s a tough one. I choked up just reading the question, I think my favourite memory of working on a show with Dad was listening to him sing “More I cannot give you” (I’m not sure what the correct name is) from Guys and Dolls. He brought such love and warmth to his role it was inspiring. I also loved his choice of costume in Pirates of Penzance when he chose to be a kilt wearing pirate, lovely.

We sang many duets together in church here in Cobourg and in Glasgow that was a special bond we had. I remember turning to him one time after we had sung something that had particularly moved me and I kissed him. It was very special. Every time we go to visit my family in Glasgow I sing in our church there in his memory.

LC: Well, we want folks to come and see Broadway On the Rooftop. Other than the fact that you’re back singing onstage again – why should they buy tickets to see this one?

FF: This show has everything; great music from some of the most famous shows to grace Broadway in the last 50 years, a few standards that everyone will recognize to some lesser known gems that will surprise. A group of talented performers including not only some favourites from past shows but a number of fresh new faces. It has wonderful comedy, rousing dance numbers and a fun script to tie it all together. It’s going to be extremely entertaining and everyone will leave the theatre with a smile on their face and a song in their heart.

LC: You’ve directed several productions for VOS.  Tell us about what it’s like to do that.

FF: I love working with a cast, bringing a group of people from first read-through to final Dress rehearsal through all the process of developing characters, coaxing the best performance out of each person; encouraging performers to dig deep and risk putting themselves “out there” to portray a character; working with young people, fostering their interest in theatre; seeing some of them continue on over the years growing up and maturing into wonderful young adults – it’s very satisfying knowing that perhaps I have been able to have some small positive influence in their life that has brought them to be the confident, accomplished people we see now.

LC: Thank you, my friend.