We sat down with Author and Playwright Linda Hutsell-Manning, who tells us more about A Certain Singing Teacher, and about herself.

About the Play: Aspiring singer song-writer, Francine LaSalle leaves her philandering theatre agent partner, Allan Fairfax, to set herself up in small town Kraymer’s Corners as a singing teacher. She gives versions of her one published song to her students. Meat market entrepreneur Antonio Pasquali who dreamed, when young, of an opera career has the opera version. Waitress Hillary Carlyle who emulates a rocker chick, has the pop version. Co-op worker Sam Saller who longs to attend Julliard works on an improvised jazz version. When the local radio station advertises a Talent Contest and Allan shows up as a judge, hilarious and improbable complications develop.

VOS Theatre: Linda, when was your first writing project accepted for publication? 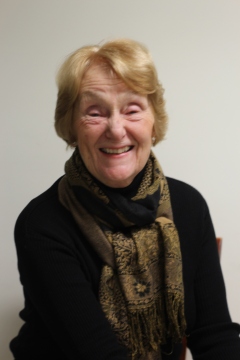 Linda Hutsell-Manning: My first publication was a children’s book, Wondrous Tales of Wicked Winston, Annick Press 1981. I had been writing for several years and had a book review column in the  Cobourg Daily Star. I was mainly writing short stories, sending them out to literary magazines and having them rejected. Winston is a rhymed narrative poem, the first verse of which simply came into my head one day. I developed it into a story in rhyme and Annick Press was the 32ndpublisher I sent it to! As I recall, this took several years as the manuscript had to be mailed with a self-addressed-stamped-envelope (SASE) and publishers often took months to reply. The story was 26 verses long and Annick asked for a second one, saying the first wasn’t long enough for a book. The first story takes place in summer and the second over Hallowe’en. I still have the outline for winter and spring episodes but have never completed them.

VOS: Have you written any other plays?

LHM: During the time I was sending Winston out and getting it back, I attended a school play production at Merwin Greer School. The play they used was American and when I asked why not a Canadian play, they said they couldn’t find one. This motivated me to write the first of three children’s plays. Freddykid and Seagull Sam was first produced by the newly formed Northumberland Players in 1978 and the cast included  Shelley Netherton as Seagull Sam, my son David as Freddykid and Tom MacMillan as the Captain. It was incredibly exciting to see my characters come to life and, after a successful run in Cobourg, I sent the script to Playwrights Canada asking about publication. They promptly sent it back saying I must have an equity actor production before they would consider it. Kawartha Summer Festival in Lindsay produced it in 1979 and Playwright’s published it in 1982. I wrote two more kid’s plays for Kawartha Summer Festival: Merch the Invisible Wizard, published in 1983 and The Great Zanderthon Takeover published in 1984. The music for the first two plays was written jointly by Jacqui Manning-Albert and Don Herbertson.

VOS: How did the idea come to you to write A Certain Singing Teacher?
LHM:  The Canadian playwright, Allan Stratton, had written a playNurse Jane Goes to Hawaii and, in 1985 , in the old space at the Best Western, I played the lead, Vivien, a ditzy Harlequin Romance writer. This play was enormously successful all across Canada and this inspired me to write my own comedy. However, I did not, as Allan did, have theatre contacts to get it started. Once written, I mailed it  to over 20 professional theatres across Canada with a SASE and not one answered or returned the script. I found out later that theatre companies were known for not replying to unsolicited manuscripts. I’m fairly sure I wrote the first draft a year after I was in Nurse Jane. How the exact idea came to me, I don’t know. One of the mysteries of being a writer. I can say a number of real life situations probably inspired me. I certainly knew people who were having marriage and/or partner problems and, in the eighties, more women were venturing out on their own, trying new roles. Francine is one of those women. I purposely made each of her students a distinct individual whose past and present influenced why they wanted to take singing lessons. The plot developed as I wrote these characters although I did purposely bring her ex back to cause complications. As soon as I heard the wonderful song, “I’m Not Through With You Yet” written by Jacqui Manning-Albert, I knew it would be perfect in the play. However, after so many rejections, I put the script away and went on to write in other genres. It was my good fortune that, in March 2016, the VOS read my play during one of their play-reading  sessions and decided to produce it in their 2016/2017 season.

VOS: Is the main character, Francine LaSalle, based on a real person you know
LHM: She is, as are the rest of the characters in the play,  an amalgam of people I knew or had met as well as bits and pieces of characters in books and plays. Whatever a character starts out as, he or she soon takes on a definite personality, their own persona so to speak and, often, they do or say things the writer has never consciously thought of. Sometimes the writer may argue with these characters as to a certain line or action and, usually, the character tries to get the upper hand. It’s an interesting mind-wrestling exercise and often a tossup as to who wins. The play Six Characters in Search of an Author  explores this mind tussle between created  characters and their author. After seeing this play, I remember being so impressed and feeling, somehow, justified that what was happening when I wrote was a viable aspect of the creative process.

VOS: How much time do you spend on writing projects?
LHM: It all depends on the length of the manuscript, which is usually tied to the genre. My first picture book, Animal Hours, I wrote in a day, with very few subsequent changes, while my novels have taken, usually, a year for the first draft and another year  for rewrites. The first draft of Singing Teacher was written, I think, during  six months and then another year or more for rewrites. We are still tweaking the script as it is rehearsed.

VOS: Has you writing career involved any travel?
LHM: I have travelled across Canada a number of times promoting my books. In the eighties and nineties there was more grant money for book promotion. Then and now, I often combine family, relative and friends visits with readings. In 1999 I, travelled to Coburg, Germany and Luxembourg  giving readings in schools (in Germany mainly high schools). The research from visiting these two places gave me material that became the settings for my two juvenile time-travel novels, Jason and the Wonder Horn and Jason and the Deadly Diamonds. Whenever a new book comes out, an author has, with much self-promotion and hustling, the possibility of setting up readings and traveling.  Jason and the Portrait Snatchers, the third in the series but not published, was written after a family trip to England and, in particular, Bristol.

VOS: What are you working on now?
LHM: I am researching and writing a memoir about two years, 1963 to 1965, when I was teacher and principal of eight grades in a one room school, SS#2 Hamilton Township School known as  the Front Road School West. It was situated on Highway Two between Cobourg and Port Hope, on the south side, two doors east of Lane’s Garage. In those days the land on either side was pasture for nearby farms. The brick school, which had seen better days, had two chemical toilets inside the front door, a wood stove for heat, one cold water tap and no storm windows. Talking to former students and finding information is both challenging and rewarding. A trip down memory lane. I am, also, thinking of beginning another two act comedy. I haven’t written anything down yet, but probably will soon.

More information about Linda can be found on her web page: www.lindahutsellmanning.ca