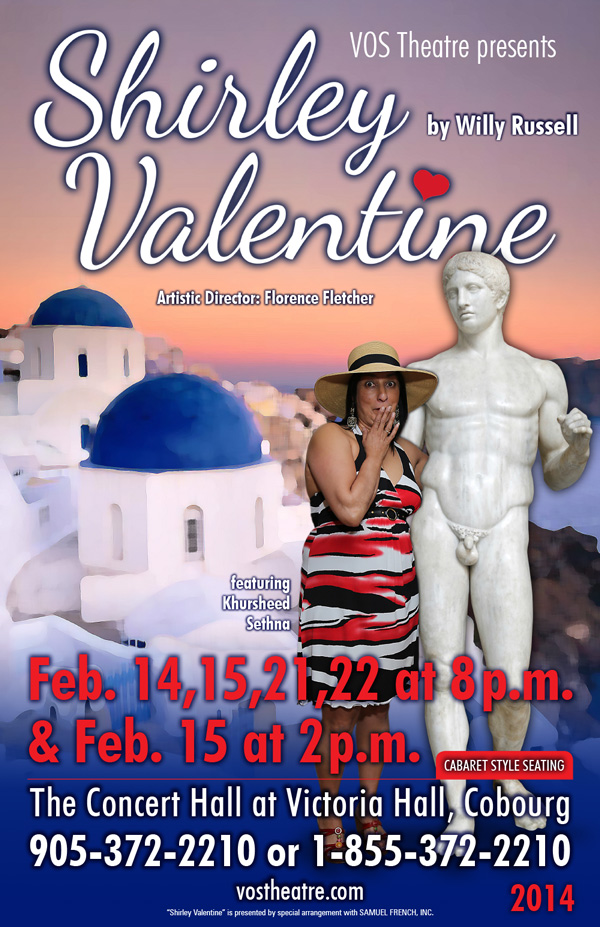 Who but a greek god could put such a smile on her face like that? Kursheed Sethna is Shirley Valentine.

We laughed with her as Ado Annie in Oklahoma!, we marvelled at her as Sister Robert Ann in Nunsense, we admired her as Clare in Vimy, and we fell in love with her as Betty in White Christmas.

This November, you can fall in love with her all over again as Kelly in the amazing new show, On The Rooftop. 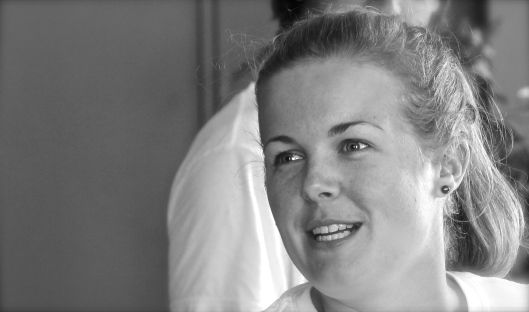 This is Marlena Sculthorpe – and we had a chance to talk with her this week.

Q: Why do you do theatre?
A: I love musical theatre because it encompasses all of my interests in one medium.

Q: Who are Ian and Walker?
A: Ian is my farmer husband.  Ian loves farming – he especially loves his cows.  We have approximately 150 head of grass fed beef cattle in Port Britain (just west of Port Hope) and we also have about 100 acres of crops varying in type from year to year.  Ian spends a lot of time working, but takes some time to play ultimate Frisbee in the summer and hockey in the winter.  Although he doesn’t have the musical bug, he enjoys coming to watch VOS productions.  He loves the really corny jokes….those kind of leg slapping puns that only your grandfather enjoys. 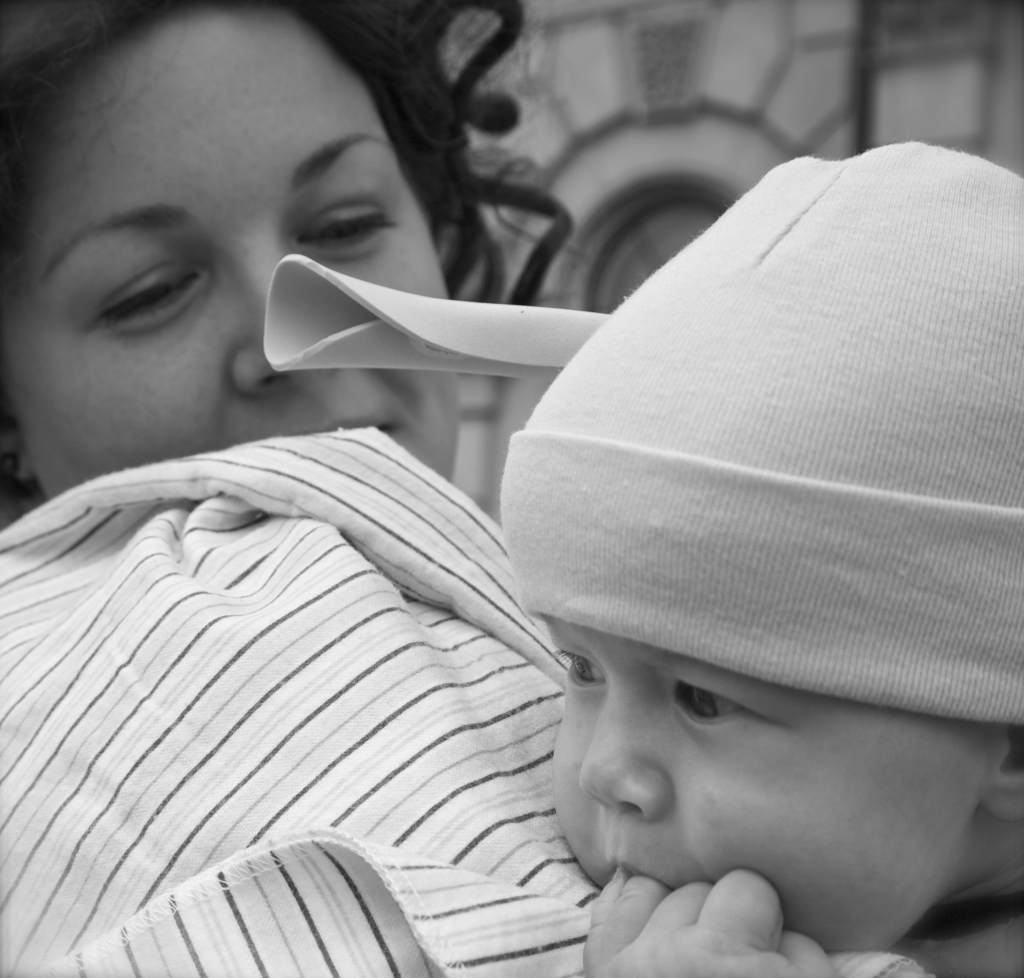 Walker is my very bright, determined 8 month old son.  Although most people say he looks like his father, he has his mother’s personality.  When I sing, he attempts to sing along making a really lovely sound.  Imagine a tone deaf lounge singer who’s spent more time drinking and smoking than singing.  He loves to watch me practice the choreography for the show.

Q: What motivates you to come back after starting a family?
A: I have been involved in theatre/performing since I was a small child.  I didn’t need a lot of motivation to come back.  It is so much a part of who I am that I really can’t stop doing it.  I think it’s important for a child to see a parent with a passion and be part of a group in the community.

My father has graciously offered to watch Walker when I’m rehearsing on Sunday afternoons and he and Ian share time looking after Walker when he’s sleeping in the evenings.  November is a pretty slow time of year for farming, so Ian and Walker will become good buddies.  There’s always a way to make it work.

Q: How many show tunes does Walker know so far?
A: He does a mean tap dance to “I love a Piano”.
Q: What has been your favourite moment in theatre?
A: Oh a tough one! Recently: The “Habit Humour” scene/jokes in Nunsense and the ballet piece in that show with Sam Clark made me crack up on the inside everytime.  Nunsense in general is a hilarious show.  I also loved playing Ado Annie.  I had so much fun with Nick Carreau and Jamie Hunt. 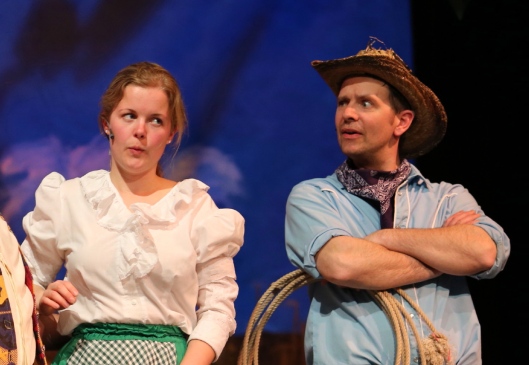 Q: What characters do you identify with that you’ve played?
A: I think to do a really good job with a part you have to identify with something in every character.  Even the worst character has to have some redeeming qualities – you have to find them to make the audience like you.  When I act I like to find things about the character that relate to my real life and past experiences.  It’s difficult to play your character and be able to react appropriately if you don’t have something to reference it to.  For me, acting is less about researching and looking externally for answers about your character, it’s more about looking internally to see how a real person would respond.  Even a comedic character has to be real.

Q: What was the toughest thing you’ve had to do in theatre?
A: My answer will always be: play a serious role.  It doesn’t come naturally to me.  I’m much better at silly faces, exaggeration and funny voices.  I have to work so much harder for a dramatic role and I still feel like I’m not doing it right!  It boggles my mind when people can cry on command.  I absolutely can’t do that.

In April of 2012, the VOS production of Oklahoma! was a big hit with audiences.  Look for some of these faces to show up in the November 2013 production of On The Rooftop 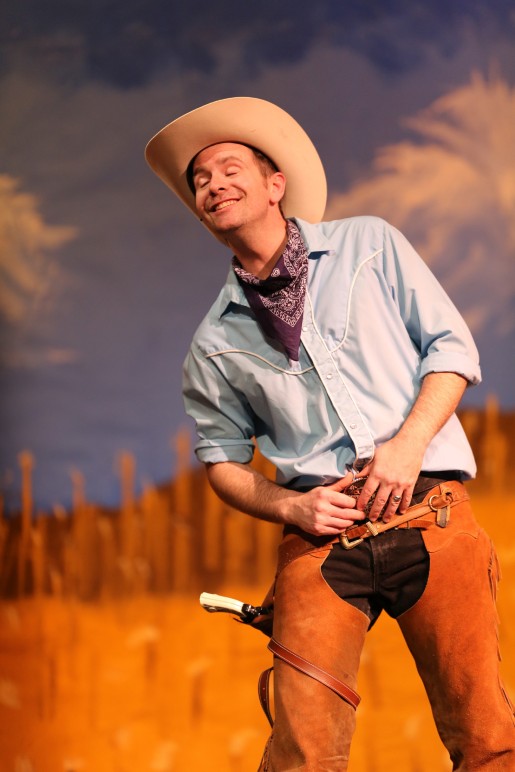 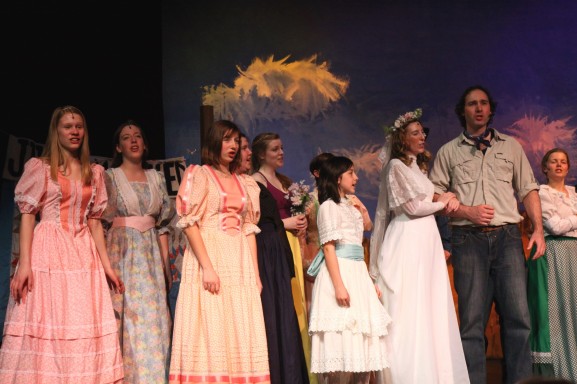 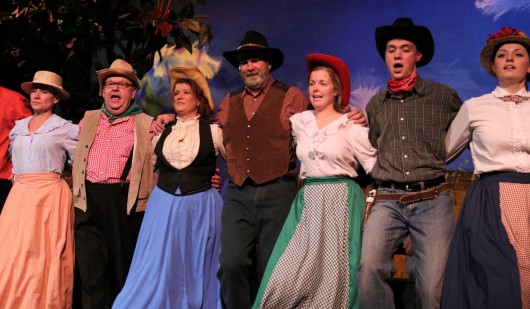 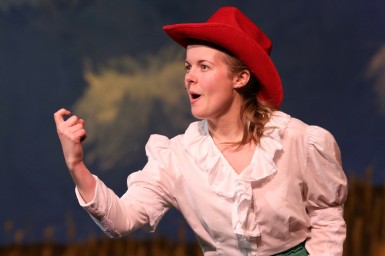 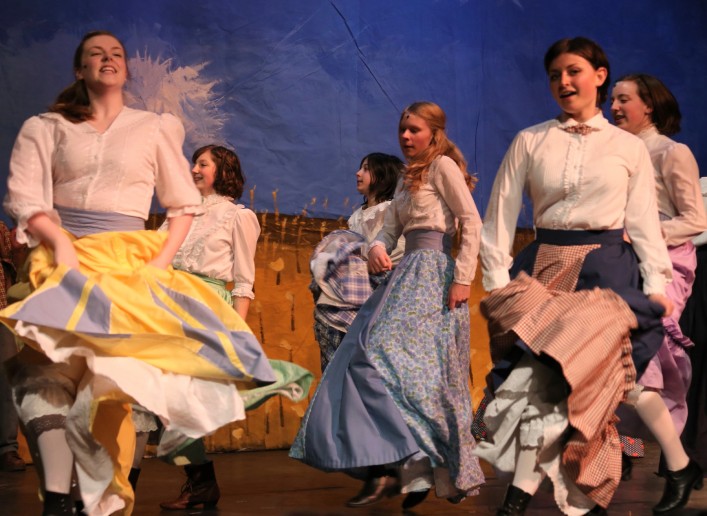 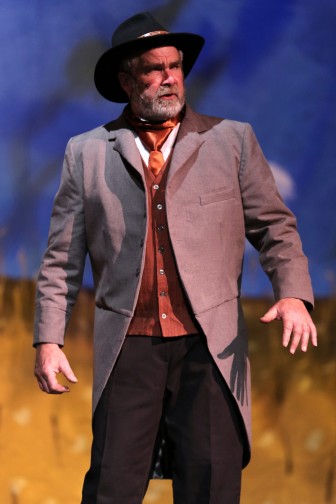 We recently had a chat with the man who, as a writer, has given us On The Rooftop, and who, as Director, takes us there.

This is James Michael Finan.

We call him Jim.

VOS: Where does the inspiration for On The Rooftop come from?
Jim Finan: It wasn’t so much inspiration as it was opportunity. Doing an original production gives us a chance to really focus on the terrific talent bank we have. Rather than focus on the name of the show, the costumes, or the sets, the audience’s eye and ear are drawn to the wonderful performance skills these talented folk bring to the stage.

VOS: How did you pick the music?
Jim: It certainly is an eclectic mix. We first polled the VOS company and everyone submitted their favourite musical theater pieces. I threw in a few more songs from some lesser known shows. From that, I whittled it down to a list of forty-eight. Then a final list of twenty-two. The tricky part was getting the songs to fit the plot lines and vice versa. Most of all, we wanted to present a mix of well-loved classics with some marvelous musical surprises.

VOS: Who are these characters?
Jim: Well, certainly they are the folks who auditioned! There’s not a person in the company who has not experienced love and loss. It’s just a matter of bringing that forward. Of course we change the names and invent occupations, but everyone can relate to relationships that have gone wrong…and others that have gone right.

VOS: Is there a story behind this story?
Jim: I mentioned in rehearsal the other night about a famous actor who appears to be teasing his audience with his “secret”. Our characters each have a secret as to why they are driven to perform. Each brings his own “story behind the story”.

VOS: How has the story changed based on your experiences with the cast?
Jim: I think it helps that I had previously met most of the cast members but I do not know them well. As a result, it freed me up to write for them without personal bias. My only regret is that there wasn’t more stage time to flesh out stories for each of them. They are all unique and wonderful.

VOS: How is this a “VOS” show? What does that mean to you?
Jim: I’m humbled and honoured to work with such a professional group of people both in front of and behind the curtain: musicians, technicians, costumers, producers, promoters. These passionate people do a full day’s work, tend to their loved ones, then come out to work on the show. Their trust in this unknown director with an unknown show has been remarkable. Every community theatre group experiences the emotional rollercoaster ride of creating a show and VOS is no different. With “On the Rooftop” we take our audience behind the scenes for a taste of that thrill. Buckle up!

VOS: Is this the first show you have worked on with your wife Jamie (assistant stage manager)?
Jim: In this particular theatrical relationship, yes. I really can’t say if this is healthy for a marriage or if we are tempting fate. Our kids are grown and gone so it beats sitting at home staring at each other! She’s a great sounding board and won’t hesitate to let me know when I’m dead wrong. I’m delighted to have her on board. Not sure if the feeling is mutual!!!!

VOS: What lead you to work in the theatre years ago?
Jim: There have been lots of moments that drew me in. My sisters and I would harmonize singing “It’s Only A Shanty in Old Shanty Town” while we did the dishes. My cousin took us to Stratford to see Jean Gascon’s production of “The Three Muskateers” and I was hooked. My own work as a director began after I saw a high school production of “Bye-Bye Birdie”. The students wandered about the stage looking quite lost. I thought I think I can do better. I did, but not by much….which led me to study at Banff. The rest….as they say is boring!

Our photographer Ken took a boatload of photos during rehearsals for Spamalot.  We’ve had them on ice for too long… 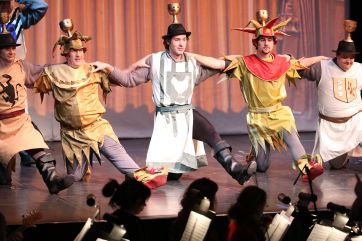 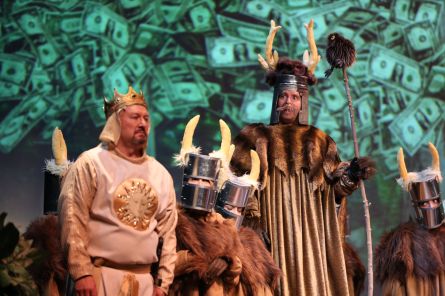 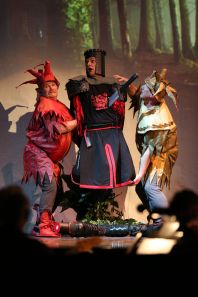 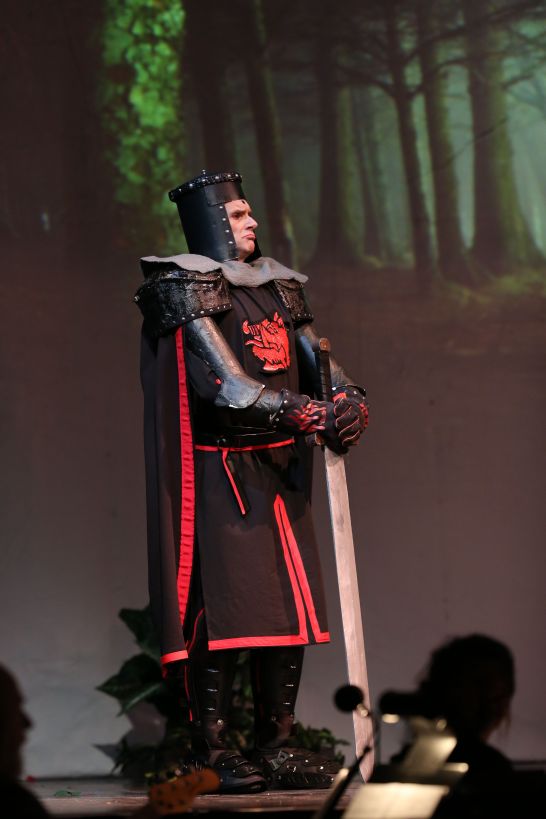 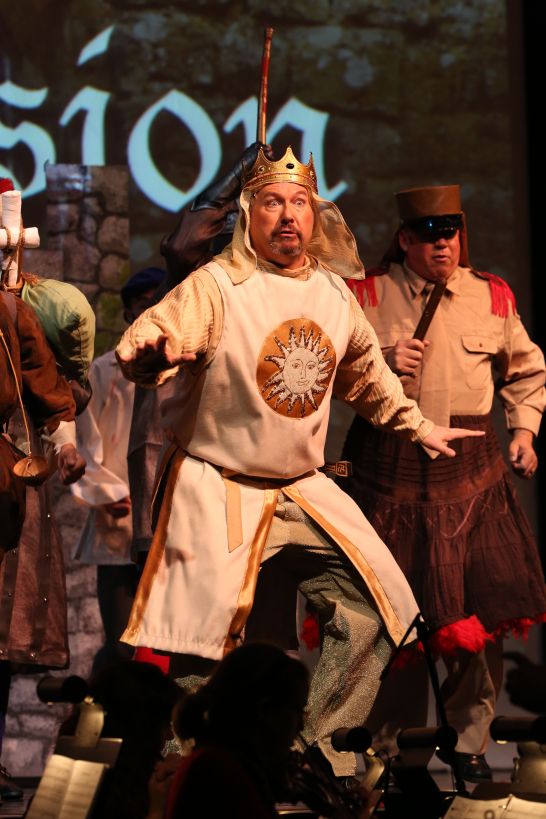 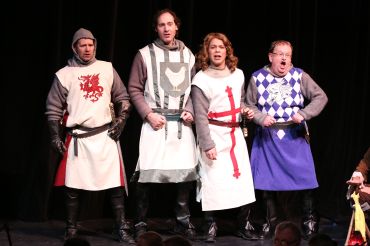 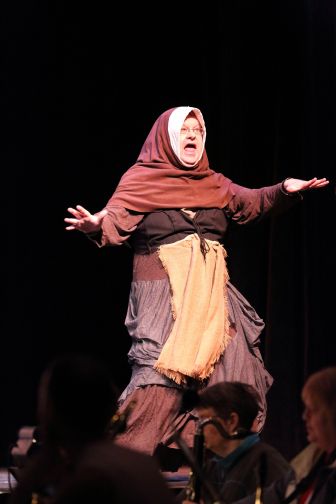 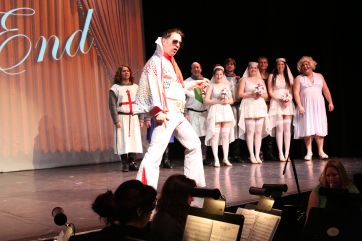