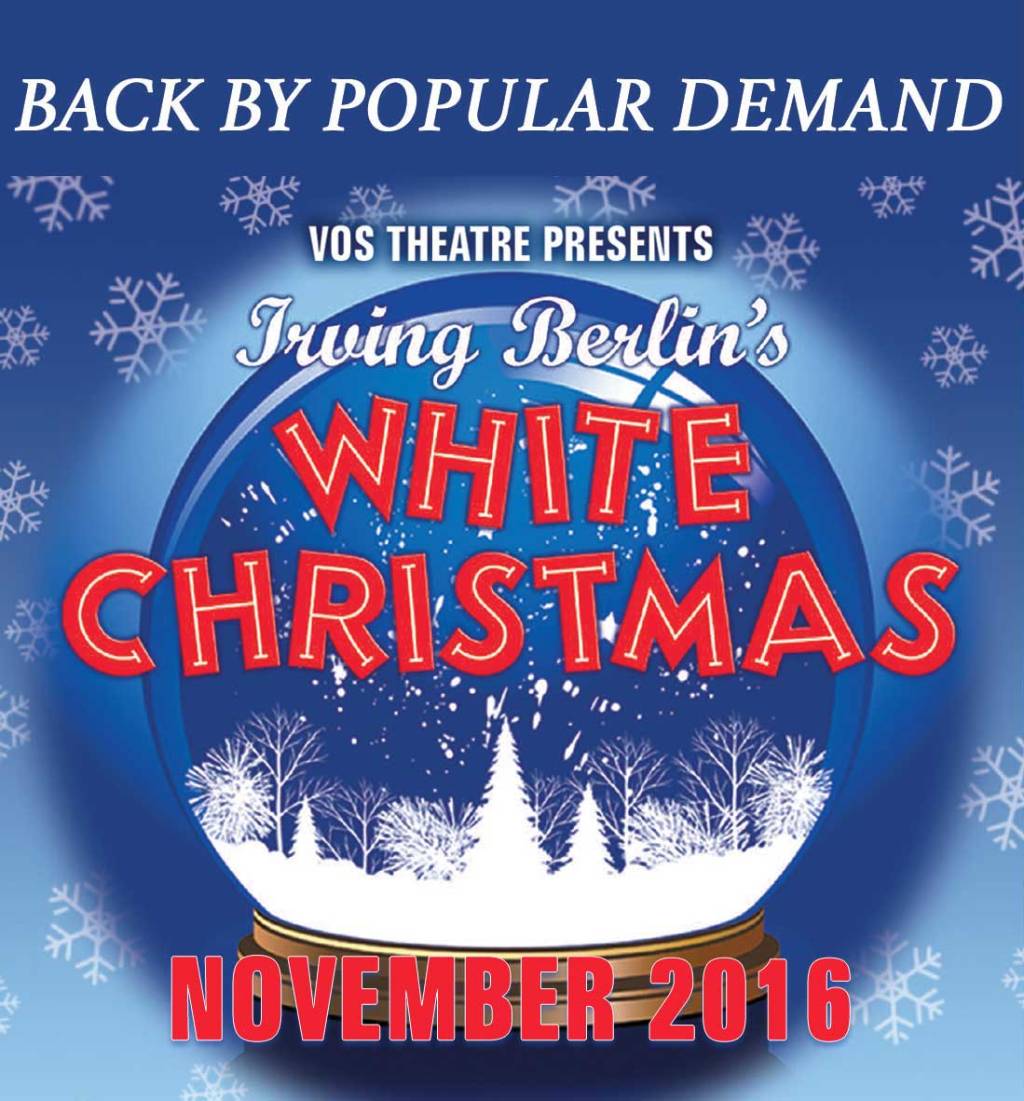 With a Creative Team of Florence Fletcher, J.P. Baldwin and Liz Clark, the production includes a live orchestra lead by Jill Baker, with Vocal Direction by Angela Main.

Based on the beloved, timeless film, this heartwarming musical adaptation features seventeen Irving Berlin songs. Veterans Bob Wallace and Phil Davis have a successful song-and-dance act after World War II. With romance in mind, the two follow a duo of beautiful singing sisters en route to their Christmas show at a Vermont lodge, which just happens to be owned by Bob and Phil’s former army commander. The dazzling score features well known standards including Blue Skies, I Love A Piano, How Deep Is the Ocean and the perennial favorite, White Christmas.

Now a tradition in it’s own right, the VOS will host a Christmas Cabaret with your favourite performers, tasty treats, and large dollop of holiday cheer! Stay tuned for more updates on this event. 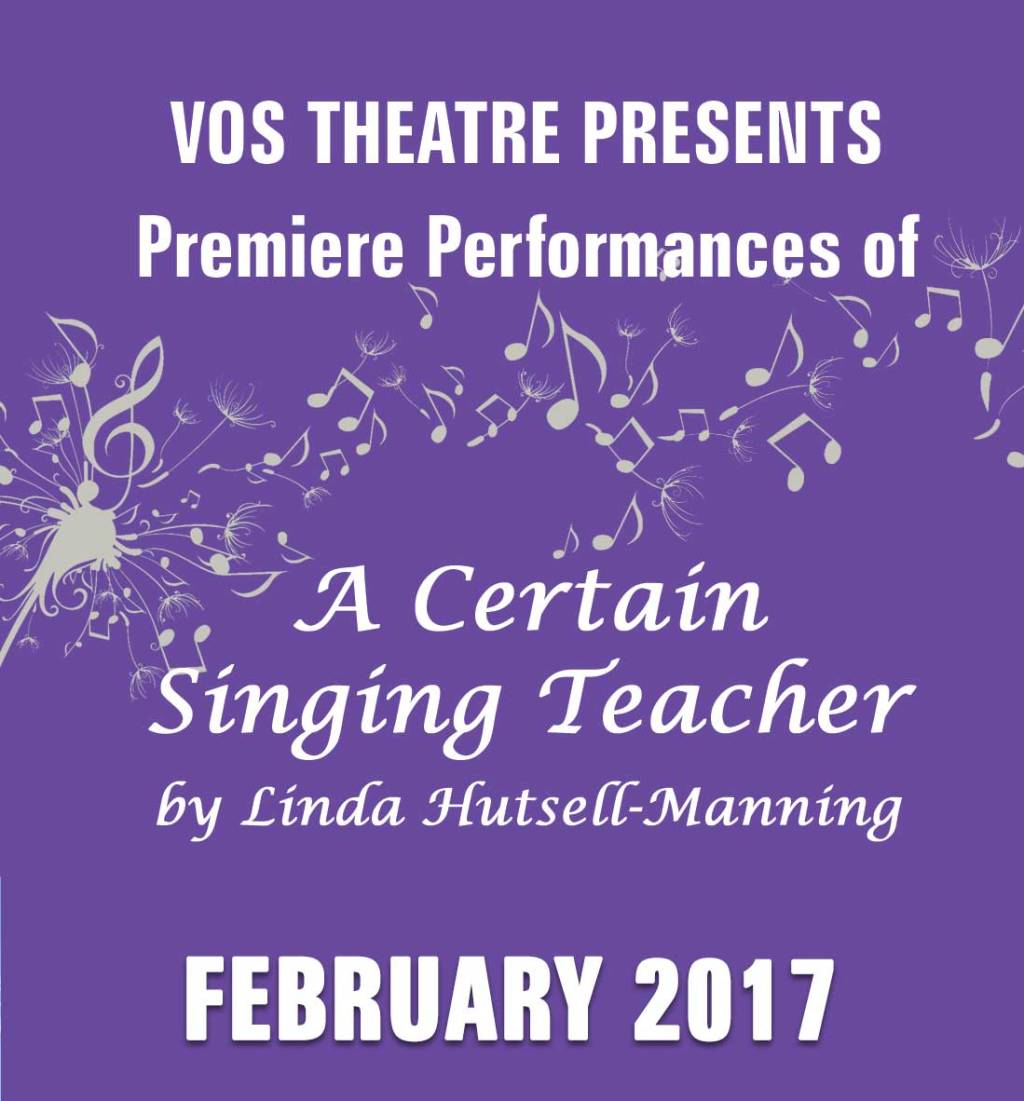 VOS is delighted to present the premiere performances of A Certain Singing Teacher, a play by renowned author Linda Hutsell-Manning of Cobourg, Ontario.  3 shows only, opening February 10th, 2017, directed by Florence Fletcher.

Aspiring singer song-writer, Francine LaSalle leaves her philandering theatre agent partner, Allan Fairfax, to set herself up in small town Krammer’s Corners as a singing teacher. She gives versions of her one published song to her students. Meat market entrepreneur Antonio Pasquali who dreamed, when young, of an opera career has the opera version. Waitress Hillary Carlyle who emulates a rocker chick, has the pop version. Co-op worker Sam Saller who longs to attend Julliard works on an improvised jazz version. When the local radio station advertises a Talent Contest and Allan shows up as a judge, hilarious and improbable complications develop.

Presented by permission of the author.

Stay tuned for more details on this event!

We can’t announce the title just yet, but don’t get your pig-tails in a knot, you’ll be able to buy tickets soon.  You won’t want to miss this heartwarming family show, especially on Canada’s 150th birthday!  Make beautiful Victoria Hall in Cobourg your summer destination next year, with opening night set for July 2017.

The Ruth Harcort Memporial Scholarship is awarded to a graduating student from Northumberland County who is continuing their education at a post secondary institution. The Committee will select a candidate who has shown dedication to the arts (theatre, music, fine art) and exemplifies the characteristics that Ruth valued – inclusion, ingenuity, generosity of spirit and commitment.

The recipient of the 2016 Ruth Harcourt Memorial Scholarship is Noah Lefrancois.  Noah has been involved with music and fascinated with musical instruments since he was in public school. He became a member of the Cobourg Concert Band in Grade 7 and was called upon by the west high school while he was still in public school to join their jazz band. He was also in his high school band.

But Noah did not win this scholarship because he plays 12 instruments (yes folks, 12!) and participated in a number of bands. He won it because he is an example of how involvement in the arts can enrich all aspects of your life and prepare you for the future.

Noah, who is attending McGill University in the fall to study physics will be playing for their football team The Redmen. He credits working with the Concert Band and learning leadership skills from section leaders for helping him to be a better football Captain. He told the selection committee that in working with these musicians taught him life skills he is able to apply because he was treated as a peer. His involvement made him a better section leader in his high school bands, on a better captain n the football field and a more relaxed human because he had music in his life which became not only a creative outlet but a stress-free way in which to express himself.

Noah Lefrancois, is an athlete, an exceptional student and a musician who believes in sharing his love and knowledge of music so that it can benefit others. He believes in mentoring the way he was mentored himself. He displayed and communicated commitment, ingenuity, generosity of spirit and VOS is proud to award him with the Ruth Harcort Scholarship.